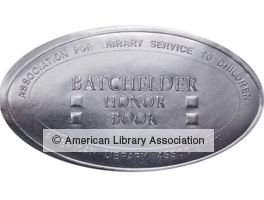 The War within These Walls has been named a 2014 Batchelder Honor Book by the American Library Association. The Mildred L. Batchelder Award is given annually to an outstanding children’s book originally published in a language other than English in a country other than the United States and subsequently translated into English for publication in the United States.

This is the third Award for The War Within These Walls in two weeks time!

Watch the trailer of the book here.